The Pioneer of The New Era in Higher Education: SUBÜ

SUBU was included in the title of Universities with Professional Practice in the project conducted within the scope of the Diversity Period in Higher Education and announced by the Directorate of Communication. In his statement, Rector Sarıbıyık said that he was pleased that the solution proposals find a response and said they were happy to be a role model.

Sakarya University of Applied Sciences (SUBU) took place under the title of Universities with Occupational Practice within the scope of the "Mission Differentiation and Specialization Project" announced by the Presidency of Communication. Declared with an emphasis on the Period of Diversity in Higher Education, the project includes Research and Prospective Research Universities, Regional development-focused Universities, Professional Practice-Oriented Universities, and Thematic Universities. 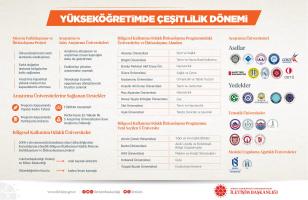