Academicians of Sakarya University of Applied Sciences (SUAS) Faculty of Technology have developed a device capable of scanning hand and foot veins for identification in addition to finding patients' veins more efficiently during the injection process.

A prototype of the device, that has been produced as a result of the 4-year-dissertation studies of PhD student Ömer Faruk Boyraz with the participation of three other academicians can display the patient's vascular map so that the veins of the injected patients can be easily found. Besides, hand or foot vein traces recorded in the system can be used for identification and the information can be protected by encrypting.

Rector of SUAS Prof. Mehmet Sarıbıyık, in his statement to the AA reporter, said they attach particular emphasis on the usefulness of the research. As they act with the mission “a university that integrates knowledge with skill”, they aim to integrate associate, undergraduate, graduate and PhD degree studies with practical skills. The goal is to produce benefits for the society. The team has been working successfully and created a new device in this context, Rector Sarıbıyık added.

Stating that the device produced can display the vein anywhere in the human body, Sarıbıyık pointed out that the most prominent feature of the invention is that it allows the use of hand or foot veins for identification like the fingerprint.

Noting that the team is working on software in addition to technical work, Sarıbıyık said, "We can clearly see what can be accomplished when our colleagues are given the opportunity. In fact, we have a very high level of brainpower. Our teammates also showed that they would create outstanding work if we correctly figure out the part about planning and facilities. I congratulate my teammates."

“We Aim to Use the Device in Various Fields of Surgery”

Project coordinator Assist. Prof. Mustafa Zahid Yıldız also stated that as the Faculty of Technology, they developed a system of vein tracing and identification.

Stating that the system consists of two parts, Yıldız spoke, "Let's consider the first stage as follows: 500 million vein finding and injection processes are carried out in the world every day. About 14 million of them face troubles resulting from the difficulty of finding veins in some patient groups. Especially in patients who have undergone chemotherapy, in some older people and children with damaged vascular patterns, injection is required to find veins for a second or third time and sometimes 8-10 times. The system we have developed can visualize the veins with near-infrared imaging under invisible light.”

After emphasizing that the individual vascular patterns, like fingerprints, should be kept private and that they have developed an encryption algorithm to protect it, Yıldız said, "We have placed the encryption algorithm on this device for the first time in the world. It is a device that both displays veins and can detect the identity of the person through the vein patterns that is also secure and protected."

Yıldız said that they aim to use this device in various fields of surgery in the near future.

“We have developed a secure system that cannot be stolen.”

Stating that they spent four years of effort with a team of four, Yıldız said that the project, published in 7 different article formats, was developed entirely using the infrastructure facilities of the university.

Yıldız stated that they expect the medical sector and industry to support the commercialization of the device and made the following assessment:

“Especially fingerprints, eye retina or facial recognition are used even on mobile phones, but things like facial features or fingerprints can be stolen. For example, when you hold a glass, your fingerprint stays there, and it can be taken out and can be used. Because your facial features and facial geometry are clear on the photo, these can be used, but the vein pattern cannot be stolen under visible light. Hospitals have palm recognition systems, but they are unfortunately not sterile as you need to touch your hand there. We have developed a secure system by encrypting the upper part of the hand, wrist and foot veins in a way that cannot be stolen under visible light and without touching them anywhere. Therefore, it is much more advantageous than other devices and, because it has an artificial intelligence feature, the system constantly improves itself and detects the person one hundred percent. The margin of error is close to zero. From the outer surface of the vessel, we can detect the image of the vein from every point the camera can reach."

Yildiz noted that they also worked on foot display as people without hands taken into consideration, they could identify the person using one of their feet. 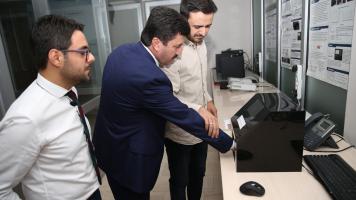 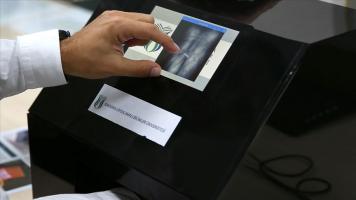